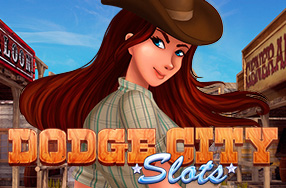 Will You Win One of Two Progressive Jackpots on Dodge City Slots?

Bet two cents to $250 on as many as 10 pay lines in Dodge City slots. With a Wild West theme and western music playing in the background, the game captures your attention. Win cash in a gunfight or gain free spins and rake in some money.

The Wild Gunslinger Pays Up to 10,000 Credits

The gunslinger is a wild. If he appears on an active pay line five times, you win 10,000 credits. The horse is the second highest paying symbol at 25 to 2,000 credits. The sheriff’s star and the cowboy boot pay as much as 600 and 500 credits, respectively.

Beyond those symbols, there are the poker symbols ranging from the 9 to the A. They pay as little as 5 to 50 credits (for the 9) and as much as 5 to 100 for the A. This leaves the bonus symbol and the scatter that pay token amounts of three credits. The bonus and scatter symbols are more valuable as triggers for the bonus features.

Sally the Scatter awards 15 free spins. To gain these free spins, she needs to appear on an active pay line three times. There’s a special feature specific to the free spins. Collect whiskey glasses. If you get three of the glasses, you get three additional free spins. Six glasses gives you three free spins and a 3x multiplier.

If you get three of the bonus symbols, you’re taken to an interactive bonus round. In this game, there are five outlaws. Shoot the outlaw and win the bounty. Keep shooting the bad guys and accumulating cash. The game can end at any point after you’ve shot your second, third, fourth, or fifth outlaw.

There’s one more thing you need to know about the bonus slot game. Two progressive jackpots are awarded randomly. They are often well over $1,000, so you can quickly win thousands of dollars doing much. The only way to win the progressive jackpots is by making a real money bet when you play Dodge City slots.